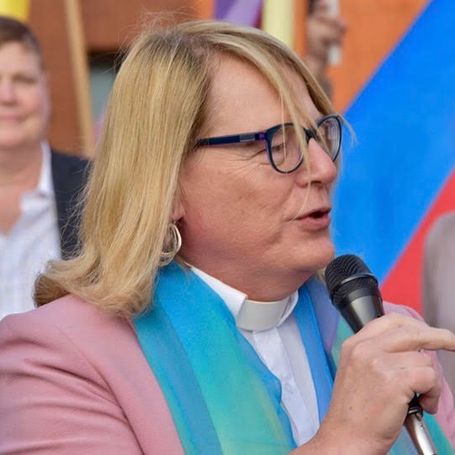 The Rev. Dr. Donnie Anderson serves as the minister of Pilgrim United Church of Christ
in New Bedford, MA. She came to Pilgrim in April, 2021. In addition to being the pastor
at Pilgrim she is a keynote speaker, workshop leader, social justice advocate and
candidate for the state senate in Providence, RI where she lives. You can learn more
about her at her websites: www.revdrdonnie.org. AND www.donnie4senate.com

Raised in Cranston, Rhode Island, Dr. Anderson enjoys the many wonderful facets of
living in Southern New England. She is an ordained minister, educator, counselor,
keynote speaker, workshop leader and social activist. She received her Bachelor
degree in Business Education from Barrington College in Barrington, RI, a Masters in
Religious Studies from Providence College in Providence, RI, a Doctor of Ministry
degree from Eastern Baptist Seminary in Philadelphia, PA as well as a number of other
graduate courses in business and religious studies.

Dr. Anderson lives in Providence, RI. At age 69 she came out of the closet, sharing with
her family and the world that she is a transgender woman. Anderson shared, “For years
my fantasy was to preach openly in a pink clergy shirt, fully expressing the fact that I am
a woman. That fantasy is now my REALITY.”

“As a member of the LGBTQ+ community that has known historic and current exclusion
and outright hatred and discrimination by many societal structures – including the
church -- it is wonderful to simply live out Jesus’ gospel of inclusion on a daily basis,
face to face and heart to heart.” Anderson continues, “Everyone needs to know that
they are loved by God, but many are told that they have to make the false choice
between being who they authentically are OR being a person of faith. That choice is not
only false, it is in direct contradiction to Biblical teaching and Jesus’ own example of
God’s inclusive love for all persons.” Anderson enjoys the opportunity to present
conversations on the intersection of transgender and faith. She is also active in social
justice issues in the areas of race, poverty and gender.

She is active nationally serving on boards and committees including board member of
the Association of Welcoming and Affirming Baptists and one of the co-convenors of the
Jewish/Christian Dialogue sponsored by the National Council of Synagogues and the
National Council of Churches.

Formerly, Dr. Anderson served as Executive Minister of the Rhode Island State Council
of Churches (RISCC) and the Rhode Island Bible Society for almost 13 years,
comprised of churches from 11 Protestant denominations, numerous other local
congregations working in partnership with several affiliated Muslim and Jewish
organizations. Previously she has severed congregations in Massachusetts,
Connecticut and Rhode Island as pastor. In addition, she has served in executive
positions in religiously affiliated organizations in higher education, publishing and
camping and conferencing.

This site uses third-party website tracking technologies to provide and continually improve our services, and to display advertisements according to users’ interests. I agree and may revoke or change my consent at any time with effect for the future.
More

This tool helps you to select and deactivate various tags / trackers / analytic tools used on this website.